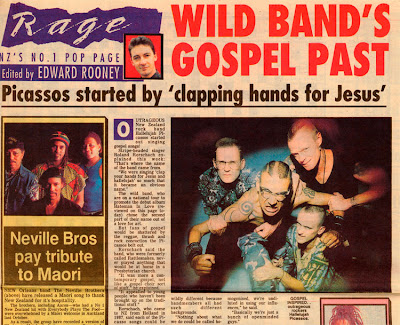 Nick Bollinger of National Radio  interviewed me recently on the Picassos reissue, the interview was broadcast on Saturday, and repeats this Tuesday night. Listen to it online here....

Also, read Auckland Public Library's Kelly Sheehan, reminiscing about the Picassos.
Excerpt... "It is too easy to characterize the Picasso’s sound by just piling musical genres on top of one another. Punky- reggae-surf-guitar-funk go the lazy lines. Really, what they played was Picasso Core and it needed to be experienced live because it was not only genre. It was pace and frenzy and the band changing on a dime. It was Bobbylon’s buoyant vocal thrown hard up against Roland harsh growl, with room still for Peter’s plaintive pop. It was the fact the band had a sense of humor that showed on their recordings and live shows. It was the speeding up and the slowing down. It was the pandemonium on the stage and the mayhem in the audience. Most of all, Picasso Core was fun..."


Andrew Dubber reviewed Rewind The Hateman on his music blog...
"Apart from all that jazz I was listening to at the time, the Picassos were the sound of Auckland in the 1990s for me. This retrospective compilation brings together so much of their brilliant work. Track 11, ‘Rewind’ was the big hit (turn it up loud to see why). Reggae/punk/funk/ska/thrash/pop from the early days of NZ’s alternative café bohemian society. I’d say “you had to be there” – but you didn’t. It’s still great."
Posted by Peter McLennan at 1:59 PM