So, we did a wicked slot before the mighty Drab Doo Riffs in June, the first time we'd played in 12 years, and it went like this...
Posted by Peter McLennan at 9:00 AM No comments: 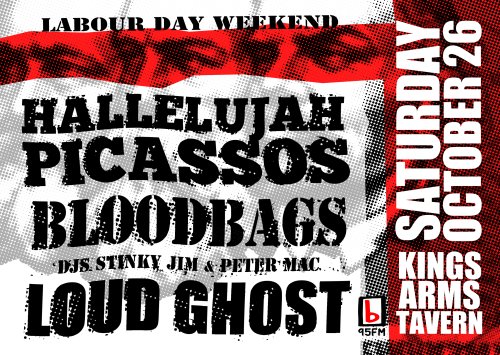 Auckland 90s reggae-dub-ska-thrash-punk outfit Hallelujah Picassos returned to the live stage in June this year, with a brief support slot for the mighty Drab Doo Riffs. After 12 years away from the live arena, they had a fun time jumping around like lunatics, and all reports from their fans at the gig were they still knew how to rip up a stage.


So, they’ve decided to put on their own show, this Labour weekend. Catch Hallelujah Picassos at the Kings Arms, Saturday October 26. With the fine musical accompaniment of Bloodbags, Loud Ghost, and DJs Stinky Jim and Peter Mac. Presented in association with our friends at 95BFM.

The band have a few special guests in store, Mr Darryn Harkness will be joining us again on the bass, and will also be signing copies of our CD Rewind The Hateman, which will be on sale at the gig. Door sales only, $15.

Posted by Peter McLennan at 7:33 AM No comments: