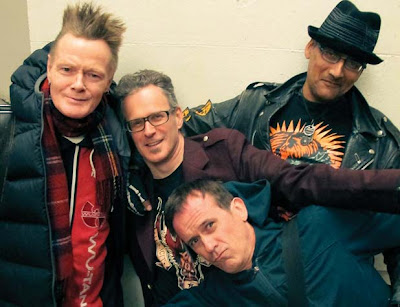 From Sunday Star TImes writer Mike Alexander - On The Beat column...
Hallelujah for the encore?

"We've been talking, for about four years now, about getting our music back in circulation," says founding member Peter McLennan.

"It has largely been unavailable for nearly 20 years and, over that period, I've been asked numerous times by fans about where they can get our CDs. There is so much great NZ music, from even just the past 20 years, that has disappeared and we wanted to bring back our part of that.

"I know there's a lot of hype around Flying Nun's 30th anniversary but they weren't the only thing happening in the 90s. I think it's important to remind people of that."

There's even talk of another Hallelujah Picassos reunion gig (they last played as the support for Asian Dub Foundation at the Powerstation in Auckland in 2000).

"As always with the Picassos, expect the unexpected," McLennan says. "No plans to tour. I have no great desire to leave the house - I am too comfortable!"
Posted by Peter McLennan at 7:37 PM