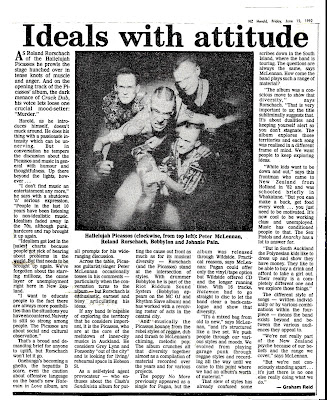 
As Roland Rorschach of the Hallelujah Picassos he prowls the stage hunched over in tense knots of muscle and anger. And on the opening track Of the Picassos album, the dark menace of Crack Dub, his voice lets loose one crucial mood-setter - “Murder”.

Harold, as he introduces himself, doesn't muck around. He does his thing with a passionate intensity which can be unnerving, but in conversation he tempers the discussion about the Picassos and music in general with humour and thoughtfulness. Up there beyond the lights, however...

“I don't find music an entertainment any more,” he says with a shutdown 'n' serious expression.

''People in the last 10 years have been listening to non-idealistic music. Idealism faded away in the 70s, although punk, hardcore and rap brought it up again.

''Idealism got lost in the sales charts because people got sick of hearing about problems in the world. But that needs to be brought up again. We've forgotten about the starving millions, the ozone layer or unemployment right here in New Zealand.

“I want to educate people to the fact there are always more possibilities than the situations you have encountered. Naivety is still so strong among people. The Picassos are about social and cultural observation.”

That's a broad and demanding brief for anyone to uplift, but Roland won't let it go.
Onehunga's becoming a ghetto, the hepatitis B scare, even the caution about offensive language on the band's new Hateman in Love album, are all prompts for his wide-ranging discussion.

Across the table, Picassos guitarist/singer Peter McLennan occasionally tosses in his comments - particularly when the conversation turns to the album - but Rorschach is enthusiastic, earnest and busy articulating his ideas. If any band is capable of exploring the territory that he considers important it is the Picassos, who are at the core of the meltdown of inner-city musics in Auckland. He considers Grey Lynn and Ponsonby “out of the city” and is looking for living/rehearsal space in Hobson St.

As a self-styled agent provocateur - who enthuses about the Clash's Sandinista album for putting the cause out front as much as for its musical diversity - Rorschach (and the Picassos) stand at the intersection of styles. With drummer Bobbylon he is part of the Riot Riddum Sound System (Bobbylon appears on the MC OJ and Rhythm Slave album) and has worked with a revolving roster of acts in the central city. And musically the Picassos bounce from the rebel styles of reggae, dub and thrash to McLennan's chiming, melodic pop.

The album crunches all that diversity together almost as a compilation of material recorded over the years and for various projects.

The poppy No More previously appeared as a single for Pagan, but the album was released through Wildside. Practical reasons says Mclennan: Pagan could offer only the vjnyl/cassette option but Wildside offered CD and the longer running time. With 16 tracks, Hateman had to go straight to disc to let the band clear a back catalogue and show that diversity.

"It's a mixed bag from old to new" says McLennan ''and it's structured like a live set. We push people through our various styles and moods. We evolved from playing garage punk through reggae styles and recording all the way until we came to this point where we had an album's worth of material.”

That slew of styles has already confused some scribes down in the South Island, where the band is touring. The questions are always the same, says McLennan. How come the band plays such a range of material? “The album was a conscious move to show that diversity,” says Rorschach. "That is very important to us; the title subliminally suggests that. It's about dualities and keeping yourself alert so you don't stagnate. The album explores those territories and each song was realised in a different frame of mind. We want people to keep exploring ideas."

''White kids want to be down and out," says this frontman who came to a New Zealand from Holland in '82 and was schooled briefly in Whakatane. ''But you can make a buck, get food every week... you just need to be motivated. It's now cool to be working class and unemployed. Music has conditioned people to that, The Sex Pistols and Anarchy has a lot to answer for.

''But in South Auckland the Polynesian kids like to dress up and show they have money. They like to be able to buy a drink and afford to take a girl out. Their reality is a completely different one and we explore those things."

The different style of songs - written individually or by various combinations within the four piece - means the band exists beyond and between the various audiences they appeal to. "We're not really part of the New Zealand psyche because of our beliefs and the range we cover", says McLennan. "But we're not consciously standing apart … it's just there is no one else really doing what we do."
Posted by Peter McLennan at 1:50 PM